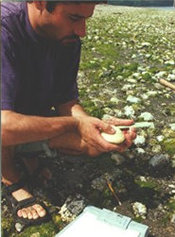 After hearing testimony from tribal elders, biologists, historians, treaty experts, as well as testimony from private property owners and non- Indian commercial shellfish growers, Federal District Court Judge Edward Rafeedie followed in the footsteps of the Boldt Decision. He ruled the treaties’ “in common” language meant that the tribes had reserved harvest rights to half of all shellfish from all of the usual and accustomed places, except those places “staked or cultivated” by citizens – or those that were specifically set aside for non- Indian shellfish cultivation purposes.

“A treaty is not a grant of rights to the Indians, but a grant of rights from them,” Rafeedie wrote in his December, 1994 decision, adding that the United States government made a solemn promise to the tribes in the treaties that they would have a permanent right to fish as they had always done. Rafeedie ruled all public and private tidelands within the case area are subject to treaty harvest, except for shellfish contained in artificially created beds. His decision requires tribes planning to harvest shellfish from private beaches to follow many time, place, and manner restrictions on harvest.

Since the U.S. Supreme Court’s final refusal in 1999 to hear the case, several parties, including the tribes and shellfish growers, have been working on an implementation plan under the guidance of Seattle Federal Court Judge Robert Lasnik.

Tribal shellfish managers have developed harvest management and supplementation plans, and harvest data is collected and shared with other tribes and the state. Examples of cooperation can be found throughout the region.