The federal Endangered Species Act (ESA) of 1973 mandates conservation and recovery of depleted species. The National Marine Fisheries Service (NMFS), under the U.S. Department of Commerce, is charged with implementing the ESA with regard to listed salmon and marine mammals.

The U.S. Fish and Wildlife Service (USFWS), under the Department of Interior, is charged with implementing the ESA with regard to other listed species. After receiving many petitions to list stocks of salmon and steelhead originating in California, Oregon, Washington, and the Columbia River, NMFS assessed the status of all coastal salmon and steelhead.

For the purposes of status assessment, NMFS defined Evolutionarily Significant Units (ESU) as regional aggregates of populations to which the ESA could be applied. 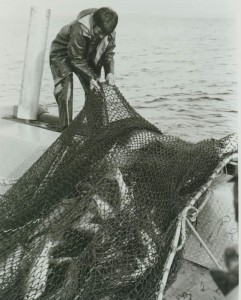 NMFS has also considered listing petitions for several other species, which were either found not to warrant listing or they remain in candidate status. These include Puget Sound /Georgia Basin coho, Pacific herring, Pacific hake (cod), walleye pollock, and copper (quillback) brown rockfish.

The ESA prohibits “take” of listed species, which includes all intentional or incidental mortality, injury, or degradation of their habitat. NMFS has been granted broad authority to exempt certain activities from the take prohibition, provided that they are demonstrated to meet specific criteria. NMFS’ rules for allowing exemption are intended to protect the abundance, productivity, diversity, and spatial distribution of an ESU.

To comply with the ESA, the Puget Sound tribes and WDFW submitted harvest management plans Puget Sound chinook and Hood Canal summer chum to NMFS for evaluation and were subsequently authorized. Because listed chinook are harvested intentionally and incidentally, all salmon fisheries under co-manager jurisdiction are covered under the plan.

In 1993 the Fish and Wildlife Service listed the marbled murrelet as threatened, and found that entanglement of this seabird in gillnet fisheries represented a significant threat to its survival. Through the Bureau of Indian Affairs, the tribes have consulted repeatedly with USFWS regarding the effects of net fisheries. Studies conducted by the tribes and WDFW in 1994 through 1996 indicated that the frequency of murrelet entanglement was very low, and that it was likely to occur only in few fishing areas.

NMFS listed Southern Resident Killer Whales as endangered in 2006, and designated most of Puget Sound as critical habitat. Though tribal fisheries have no direct interactions with orcas, NMFS is currently studying the effect of salmon harvest on orcas, because chinook are thought to be a primary element in their diet. When consultation on the chinook harvest plan is re-initiated in 2009, NMFS will determine whether salmon hatchery programs and harvest plans are compliant with the conservation requirements of orcas.

The tribes have always been strong advocates of conservation of fish and wildlife. They supported the listing of Puget Sound chinook and Hood Canal summer chum because they believed listing would promote conservation of habitat. Tribes have, since the 1990s, repeatedly constrained their harvest of salmon in the interest of conservation.