Tribal hatcheries in western Washington annually release approximately 25 million Chinook, Coho and Steelhead. Most of these species are either coded-wire tagged or mass marked prior to their release. Member tribes release an additional 17 million Chum, Sockeye, and Pink Salmon annually. These fish are harvested not only in tribal fisheries, but also in sport and non-tribal commercial fisheries.

The NWIFC operates two manual trailers and three automatic trailers that travel to tribal hatcheries in Western Washington. The manual trailers accommodate 10 to 12 workers and can process up to 40,000 fish per day. Juvenile salmon and steelhead are captured with a dip net and anesthetized to reduce stress on the fish and make handling easier. The adipose fin is then snipped off with surgical scissors. The fish are revived and returned to the rearing pond to await release.

“The tribes are committed to coded-wire tagging because they are committed to the protection and wise management of the fisheries resource. Information gathered from this program will benefit Indian and non-Indian fishermen for generations to come.”

A coded-wire tag is a 1-mm piece of stainless steel wire inscribed with six digits that is inserted into the snout of a juvenile fish. A different tag code is used for each hatchery release group. Tags are recovered from adult fish in fisheries, at hatcheries, and on the spawning grounds. Sampling technicians use electronic detection equipment to locate the tags in the fishes’ head. The snout is removed and sent to laboratories to be dissected and have the tags recovered. The tag is read under a microscope, and the information from the tag is entered into a central database at the Pacific States Marine Fisheries Commission. With approximately 64 million coded-wire tagged salmon and steelhead released annually coast wide, the Pacific Salmon coded-wire tag system is the largest mark and recapture program in the world.

Federal mandates require that hatchery produced salmon in the Pacific Northwest have a visible mark, or tag, to differentiate them from wild fish. Mass marking, or the removal of the adipose fin, allows biologists and fishermen to visually distinguish hatchery fish from wild fish. In a mark-selective fishery, fishermen can harvest hatchery origin salmon and release protected wild fish. The adipose fin mark is an important tool used by hatchery managers in their broodstocking programs. For example, in an integrated hatchery program, the spawning protocol may call for a specific ratio of hatchery to wild fish in the broodstock. The adipose fin mark also allows biologists to determine the hatchery/wild composition of fish in natural spawning streams. 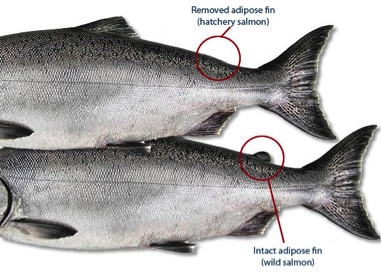