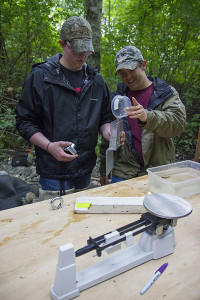 A group of teenage “citizen scientists” have been helping the Lower Elwha Klallam Tribe this spring by studying an urban creek that hasn’t been looked at in nearly 30 years.

“We’ve been smolt trapping fish on the Olympic Peninsula for 31 years, but this is the first time we’ve had one in Tumwater Creek,” said Kim Williams, a tribal natural resources technician. “Tumwater Creek is historically known to have a salmon run, but currently we have no fish data after 1991 for this stream.”

“That’s a good day, given there’s not a lot of fish in the first place in these creeks,” Hansen said. “We can learn the health of the creek by the type of fish we see.”

“After we discovered a higher percentage of coho versus cutthroat, we thought it’d be a good idea to take this monitoring program to the next level,” he said. “This preliminary result was interesting and compelled Helle Andersen at Feiro Marine Life Center to pursue and secure funding from the Mountaineers Foundation to expand our knowledge of what fish are in the creek.”

With the grant, the class has been able purchase equipment, such as nets, boots, data books and an electric scale. It also supports Andersen as coordinator of the overall project and day-to-day data collection.

“The students are so excited and engaged when we are checking the traps and they often show me their fishing background by immediately being able to identify the smolts,” Andersen said. “We all appreciate the funding provided by the Mountaineers Foundation; without this grant, the project would not have started this year.”

The students are monitoring the smolt trap daily though the salmon migration period, which typically ends in early July. Historically, coho, chum and steelhead have used the creek to spawn and rear. Being located in an urban environment, the habitat for the salmon has degraded due to commercial, residential and agricultural development.

The data collected by the students will provide information for the tribe’s database, William said, and will be an important tool for fish management decisions.

“This hands-on, field based environmental project will expose and train up our younger generations with science research skills,” Williams said. “It will raise awareness of the needs of salmon, in one of our urban salmon bearing streams. These natural world connections and experiences are critical to teaching people who care about our world, and can make informed environmental decisions for the future. It’s about passing on knowledge.”

In addition to the smolt trap work, for the past three years the tribe and the skills center students have collaborated on a variety of studies within the Port Angeles area, including participating in salmon surveys, removing a fence weir and helping remove marine debris from the tribe’s beaches.