Working with the University of Washington, a group of nine high school students in Karen Matsumoto’s marine biology class constructed small computers with temperature probes to measure water temperature in the nearshore marine waters behind the school.

“These computers will give us an idea of the temperatures that nearshore organisms experience and the stresses they go through each tide cycle,” said Danny Grunbaum, a UW professor of oceanography, who led the project.Washington State Sea Grant supported the project. 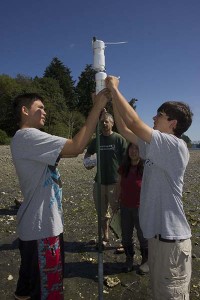 UW professor Danny Grunbaum and CKA teacher Karen Matsumoto oversee two students attaching their water sensor computer to a post on a beach near Agate Pass. To view more, click on the photo.

With graduate student Owen Coyle, the two worked with the students to construct five computers and deploy them.

“We’re learning how what we do affects the ocean and the water quality,” said junior Ty-Quay Scott.

Matchbox-sized computer processors were wired with SD cards and attached to 9-volt batteries, then placed inside an 8-inch long water-tight PVC pipe with an external temperature probe. The computers then were attached at various heights to a metal pole on the beach. Each computer was supposed to measure water and air temperature continuously over three days as the tide rolled in and out.

After the computers were collected, the data was downloaded from the SD cards, of which the students analyzed.

“We want to see how the temperature fluctuates in the nearshore,” said junior Lu-uk McCloud.

Turns out the batteries only lasted 16 hours, through one low tide and one high tide, but the computers still gathered useful data, Coyle said.

The results showed how organisms in the nearshore experience significant temperature differences when exposed to the sun and then covered with cold water from Puget Sound. In addition, for this particular time period, the air temperature at low tide overnight was about the same temperature as the water.

Due to short battery lives, the computers only collected about 16 hours of data, but enough for one low tide and one high tide cycle during the day and overnight. Credit: Owen Coyle, UW

“For cold-blooded animals, a temperature swing from about 80-50 degrees is a huge deal,” Coyle said. “It helps to emphasize why animals living in the intertidal have certain behaviors and adaptations, such as burrowing in the mud, clamming up or hiding under a shady rock.”

“It’s been fun from the beginning, constructing the computers to deploying them,” said sophomore Jacob Ewing. “It’s a way to learn new techniques for jobs in the future. And working with Danny and Owen has been fun. They’re cool guys.”